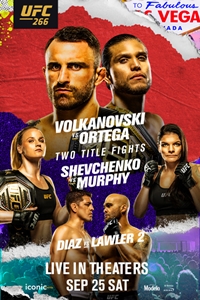 Fresh from a pair of victories over Max Holloway, UFC featherweight champion Alexander "The Great" Volkanovski defends his crown against his recent coaching rival from The Ultimate Fighter, Brian "T-City" Ortega, in the main event of UFC 266 at Las Vegas' T-Mobile Arena on September 25. In the co-main event, one of the UFC's most dominant champions puts her belt on the line once again, as flyweight champion Valentina Shevchenko battles veteran contenderLauren Murphy. Plus, it's a rematch nearly two decades in the making as Nick Diaz returns to the Octagon to battle former world champion Robbie Lawler.