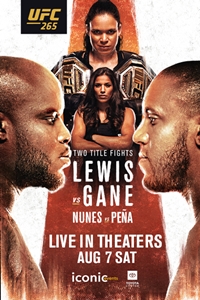 A championship doubleheader lands in Houston's Toyota Center on August 7, and in the main event of UFC 265, the interim heavyweight title will be on the line as hometown hero Derrick Lewis aims to bring the belt to his fans when he faces off with unbeaten French sensation Ciryl Gane. For "The Black Beast," a win will add to his legacy as one of the best heavyweights of this era, while Gane looks to spoil Lewis' homecoming by winning the interim belt and his seventh UFC bout. In the co-main event, the G.O.A.T. of women's combat sports returns, as double champ Amanda Nunes defends her bantamweight crown for the sixth time against the first woman to win The Ultimate Fighter, surging contender Julianna Peña.