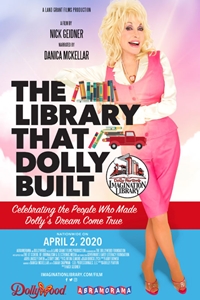 THE LIBRARY THAT DOLLY BUILT, directed by Land Grant Film's Nick Geidner, goes behind the scenes of Dolly Parton's literacy-focused non-profit, Imagination Library, to show how one of the most famous and beloved performers of the world has developed an efficient, effective and impactful program for developing the love of reading in children. Imagination Library started as a gift for the children in Dolly's hometown, Sevierville, Tennessee, and is now active in all 50 states, and 5 countries, delivering more than 1.4 million free, age-appropriate books to children every month. The film also provides a glimpse of the profound impact the Imagination Library has on the people through original interviews with authors, policy makers, Imagination Library staff, recipients, and the legend herself, Dolly Parton.